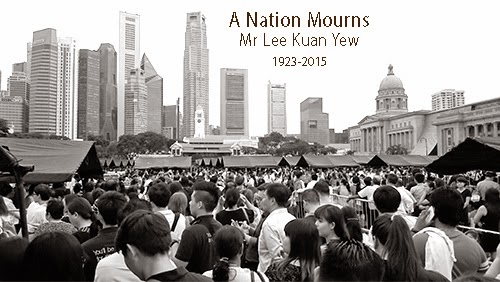 A week ago, our nation lost our founding father, Mr Lee Kuan Yew, he was 91.
He was our first Prime Minister, that led our country to independence nearly 50 years ago. Singapore was a tiny nation with not much resources at all, and he, together with his team, gave themselves to the building of this country, and brought us to where we are today. To me personally, amongst all the many accolades, his contributions are most outstanding and long-lasting in that he gave us an incorrupt government, a very safe home to grow and thrive, where many races live in harmony in a modern cosmopolitan society, where nationhood has been forged, and we are proud to be called Singaporeans.

It was a time of profound sadness and grief. It was also amazing how it bonded Singaporeans together. My family were very involved too. So I had to capture it in my PL album. I took the photos of Mr Lee off the internet, and the rest are photos taken by us, when we queued with everyone to pay our last respects. 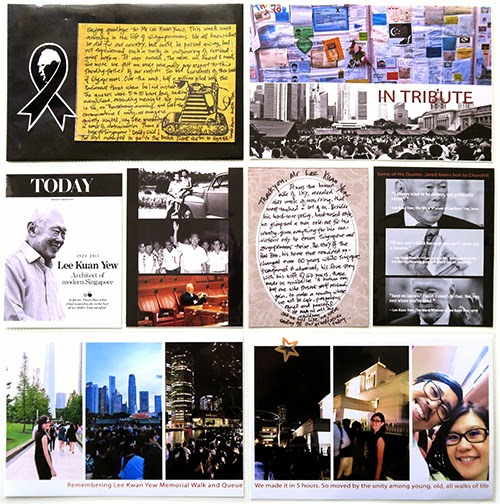 The journaling on the yellow card reads:
Saying goodbye to Mr Lee Kuan Yew. This week was amazing in the life of Singaporeans. We all know what he did for our country, but until he passed away, had not experienced such a unity in outpouring of national grief before. It was almost surreal, the more we heard and read, the more we felt we must personally pay respect to this founding father of our nation. So did hundreds of thousands of Singaporeans. Over the week, half a million piled into the Parliament House where he laid in state. The queues were 5 to 10 hours long, snaking everywhere, extending 24 hours overnight. We joined in too, on Thursday evening, and felt such commaraderie and unity, with young and old, from all walks of life, as everyone quietly waited, with little grumbling and a sense of determination. Which prompted Daddy to say "there is hope for Singapore!". The boys could not join us but managed to go to the Bedok tribute centre to sign the condolence book too.

We all hope for our children to know our history and how much the founding fathers did for us, and that all of us will remember and do not forget.

The journaling on the beige card reads:
Thank you, Mr Lee Kuan Yew.
It was the human side of Lee Kuan Yew, revealed this week of mourning, that most touched a lot of us. Besides his hard-core policy, hard-nosed style (that we know and not all can agree with), we glimpsed a man sold-out for his country, given everything for his convictions only to ensure Singapore and Singaporeans thrive. The story of the Red Box, his home that remained unchanged over 60 years while Singapore transformed and advanced, his love story with his wife of 63 years, those made us realise he is human too, but one who forsook personal gain, and self interest, to make a country where we will be safe, prosperous, have equality and peace. He made us all his children and we felt like we were sending off our father or grandfather today...

Thank you for letting me share these words and thoughts as I know many of you who come to my blog are not from my part of the world. I am glad I can share about the founding father of our country with you.

How have you scrapbooked national events? I am glad I incorporated it into our family album. I also intend to make a page or two of excepts of speeches, photos, news, eulogies that our family discussed and were moved by. Our views and feelings will be captured and that feels very satisfying and meaningful :)
In the weeks before the week of mourning,in March, life went on as usual, we did a lot in fact, especially because there was a one week school break. :) 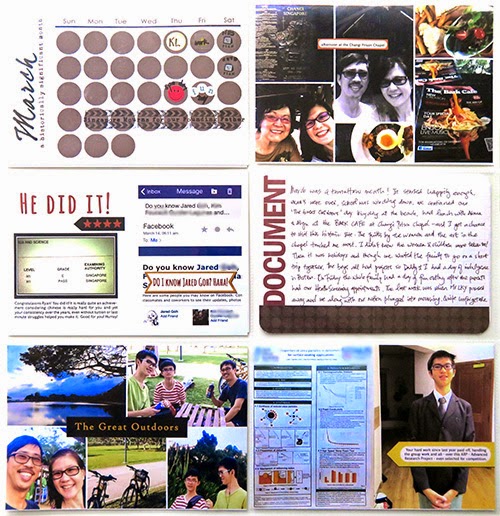 I'm continuing to use these Monthly starting cards with circles for each day of the month, which can be decorated. I had so many photos of our outings so you will notice that I used a lot of collages in this month's pages. I used templates from Designs by Lili (4x6 photo collages No 1) and Tracy Larsen (Simply white). 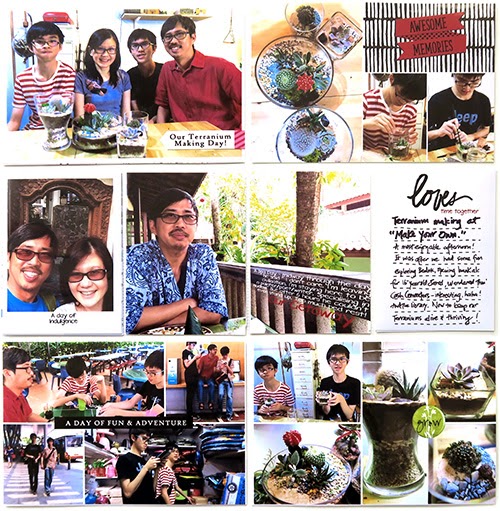 I first saw the workshop for making Terraniums on Leena's blog Findingnana. Managed to 'make' the boys go with us for a family outing at this cute local shop Make Your Own. We made a terranium each, of little succulents of our own choice. We could choose our own rocks, soil, stones and decorations, so much fun! Now to keep them alive :) Here is a close up view. 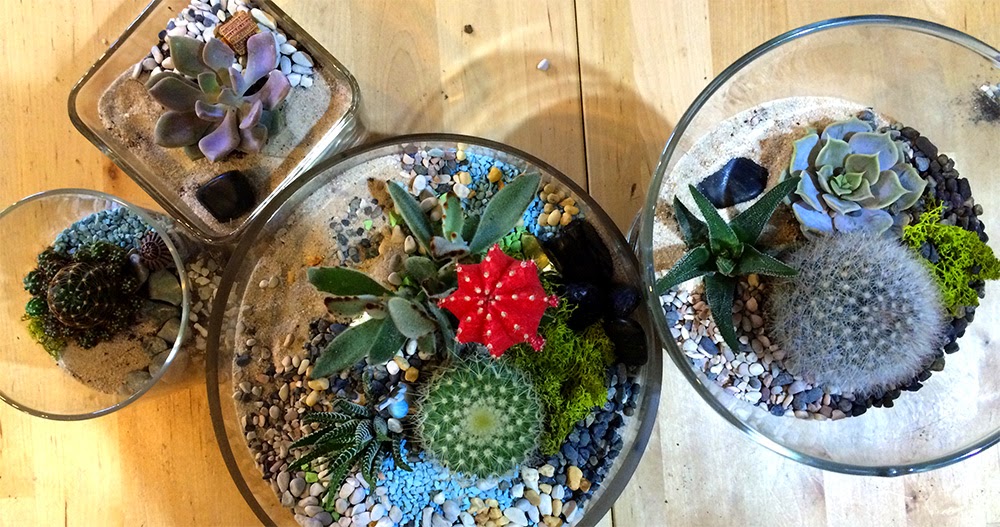 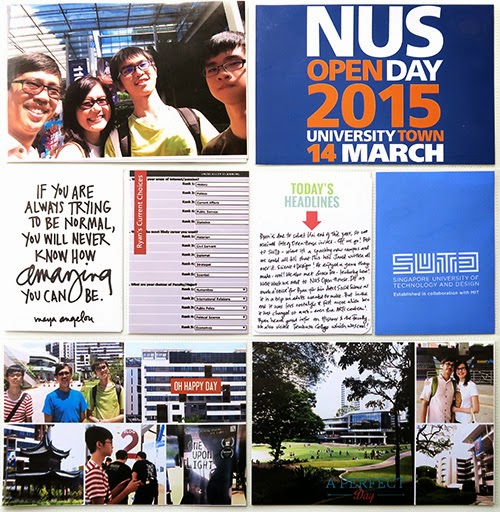 On two consecutive weekends, we visited University Open Houses. R has been receiving these invites because he is due to apply by the end of this year. It was wonderful to visit as a family. J actually found that there is such a thing as a Design and Technology University that is right up his alley. Something to look forward to, maybe! R also has been completing school counselling questionnaires etc that ask him questions about what he is interested in, what kind of career he might be hoping for, and what course of study, we have been having meaningful conversations together. And much praying too. It was also fun for me and dh to visit our alma mater, we wanted to show the boys our old haunts, but things have changed so much! It felt less nostalgic and far more foreign than we anticipated. It's their world now!

My 365 photo - half monthly layouts for March are also completed. 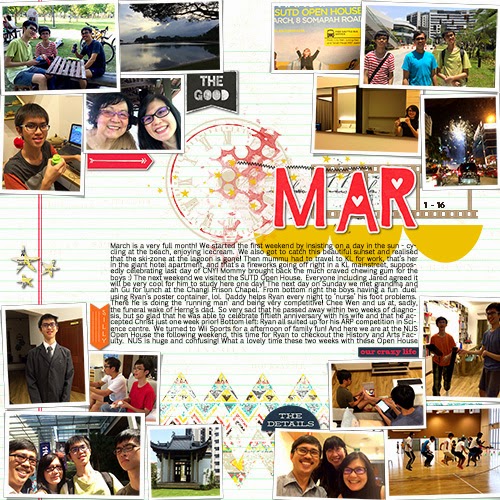 The second half month of March is on a more sombre note, so I used more black tones to complete the layout. 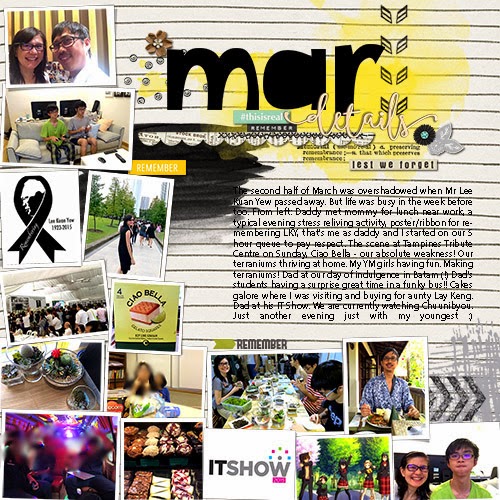 And here are the Monthly starting cards for January to June. If you had donwloaded the earlier Jan and Feb ones, please note that there was a mistake in the February month, where the days was wrongly placed. Sorry!! In this download they have been fixed. 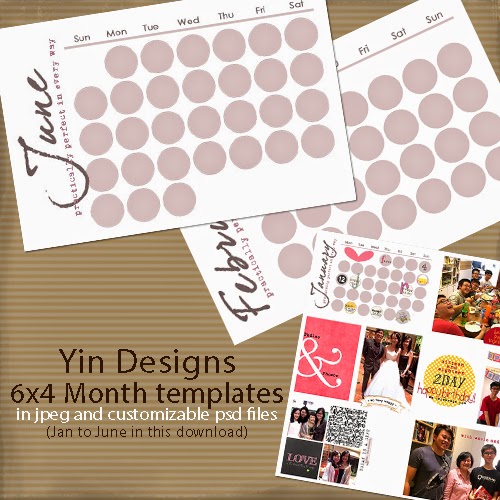