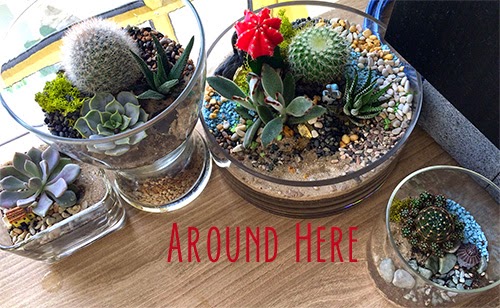 We are loving : our terraniums of cacti (so glad we are managing to keep them alive!)
We have been re-watching some of our top favorite Rom-Coms : When Harry met Sally, Sleepless in Seatle, Nottinghill, Love actually, You've got Mail, About Time (lovely evenings!)
We are catching up on adult responsibilities: reviewing our family's insurance coverage, refinancing our housing loan in view of interest rate situations, getting health checks for us and vaccinations for the boys (phew, no fun but so necessary!)
We are planning our nearby getaway in June : Thailand here we come! (looking forward!)
I have been reading: back issues of More magazine (enjoyable!)
I am really feeling the need for : a new pair of spectacles for near work (sigh)
J has developed a new response to our every question: "Don't Worry!" (you're right!)
I am seriously considering putting good money : towards a lifetime gym membership (3 years worth of double the current rates gains me lifetime access - great if I'm going to continue pilates or yoga or zumba into my seventies don't you think? lol)
I am enjoying : crunching out more London pages (yay!)

London Pages
For these lot of London pages, I chose dark backgrounds to complement and bring out the bright light in the photos. I continue to use the backgrounds I had already created earlier (see this post on artsy and quirky london pages) so the process is super quick!

St Paul's Cathedral
Our afternoon spent at St Paul's was so fascinating with so many stories! Journaling reads:
We paid the 39 pounds family ticket to see St Paul’s and did not regret it. So beautiful, stately, and full of stories. Of Sir Christopher Wren, who took 36 years to build the Cathedral and who finally saw his son put the cross on top of the dome. His tomb in the crypt is a simple plaque and slab that says, “ if you seek his monument, look around you.” Duke of Wellingtons’ monument on the other hand, was so giant his ‘horse’ had to ‘duck’ to fit in! Nelson has a beautiful Neoclassic tomb in the crypt, same size as Wellington’s. We looked for Churchill’s but was told he is Oxfordshire - there
was just memorial gates here. So many tombs of people now mostly forgotten too. hhmm... 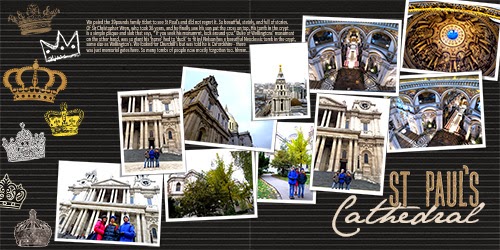 
And then when we climbed up the dome, experienced the whispering gallery and this is the view outside! Journaling reads:
We climbed to the top of the dome, and to the whispering gallery, and as we walked around and took photos of the beautiful dome, we suddenly heard “no photography!” Shocked, we looked around, who was talking to us? And found them on the opposite side of the dome!!! They sounded right NEXT to us! After the climb up to the dome, we emerged outside to this awesome view. we could see so far into London on all directions! Everything looked like the ‘miniature effect’ daddy talked about. It was especially beautiful with the golden tones all around. It is probably as Sir Christopher Wren would have it, so that all can see and worship God. He was an astronomy professor turned architect, and built it in simplicity and grandness as a place of worship. The ornateness was added in victorian times. 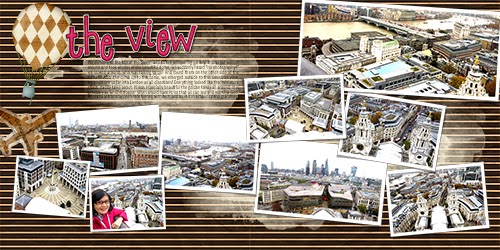 (Credits: Balloon and Plane motifs by Aja Abney, paint from Digital Scrapbook Ingredients' ALittleBitQuirky, Paper from Britt-ish Designs' I am Yours)

Stonehenge
I have wished to visit Stonehenge for like forever, so this day was super magical. And look at that fine winter day! Journaling reads:

What can we say? As the bus tour audio kept talking, we suddenly saw it in the distance, looking smaller than I imagined, but standing there, as it had for thousands of years..so romantic, so grand, so mysterious, so unaffected by the generations come and gone since Roman times, who have also wondered at it and its creators. 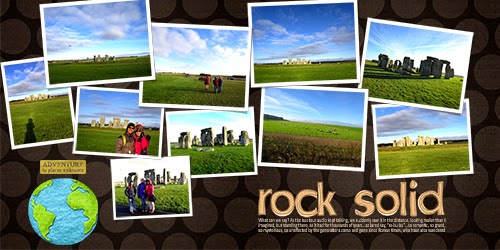 (credits: Alpha from Dunia's Saysomething, Paper, word strip and world by Kaye Winiecki (can't seem to find it in her store anymore))

Next page journaling reads:
The day was gorgeous. Sunlight coming strong then behind clouds. We had to go round the stones at a distance - they are probably a lot larger than they seemed. Some have fallen, some stand resolutely, being in the presence of something so ancient feels surreal. Wish we could go nearer, but only the birds could, they perch on the stones ignoring all rules and humans. In fact a few large black ones followed us when we were trying to have some lunch, scary! Stonehenge is really a highlight of our trip.Everything we thought it would be, mysterious, majestic, historic, and more. What you can’t see in the pictures are however, other tourists, of which we spotted several Singaporeans, in their twenties, making a lot of noise jumping and posing for jump shots. We were embarassed, but then, they are young, who knows, Stonehenge has seen all generations of young, it may not mind.:) 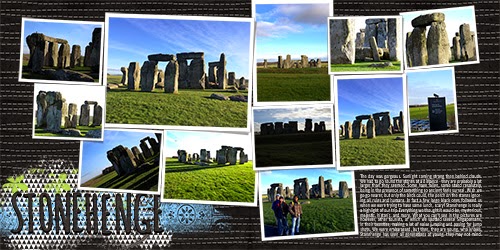 (credits: paint from Messy by Weeds & Wildflowers, Paper by Britt-ish Designs from AreWeThereYet, Alpha by Dawn by Designs)

Templates
These templates are available in the store at 20% off through to this weekend! 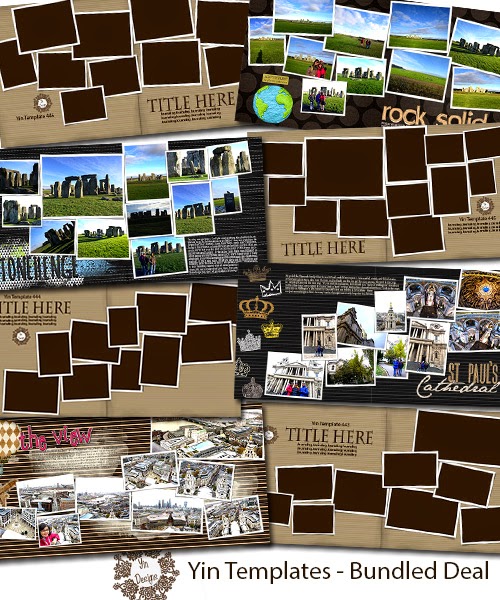 Free Download
Also one more layout from the day we visited the Historic Dockyards - it's a huge place! Journaling reads:
“For myself, individually, I commit my life to Him who made me and may His blessing light upon my endeavours for serving my Country faithfully. To Him I resign myself and the just cause which is entrusted to me to defend. Amen, Amen, Amen.“ This was the prayer of Lord Nelson the morning
of the battle of Trafalgar. His faith, his leadership, his love story, and a lot about this great man was found in the museum. Even that message he sent (below) to ‘amuse’ his men as the battle looms. We also got to see the Mary Rose, or at least the restoration of it, most haunting and amazing, to see this 500 year old warship of Henry VIII assembled before our eyes.A very worthwhile visit to the Historic Dockyards! 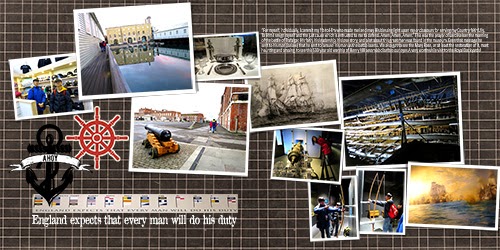 (credits: Paper from Jenn Barrette's-perfectfit, anchor and wheel from by the seaside by
Karen Lewis designs) 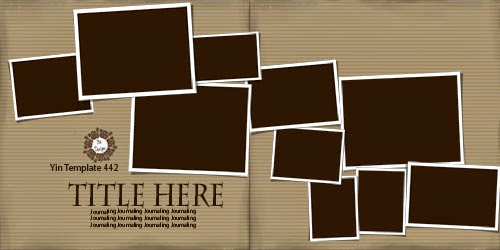 This template is now available as Template Pack 9 in the Store. Thanks for your interest!
Posted by Yin at 8:18 AM