Outside our window... it's a fine evening with clear blue skies in low light (so rare recently!)

Around the house... lots of newly built tank models and lego tanks (our family is going through a tank phase)

I am wearing... a (hand-me-up from J) Star Wars T shirt and Cotton On shorts

I am planning... a photobook to celebrate our 20th anniversary (yes!)

I am going... to start exercise/fitness classes again, it's been three months overdue!

I am wondering... how we will cope with R in boarding school next year, yikes!

I am reading... Ashenden by Elizabeth Wilhide, thoroughly enjoying it

I am hearing... 'mosaic roll' in music box tones coming from J's laptop ( I think he calls it a vocaloid song)

I am hoping... our family's allergies and rhinitis conditions will not flare up so often

I am looking forward to... one of my BFF's visit to Singapore next month!

I am thinking... how true it is that while success gives us a sense of pride and achievement and spurs us onto greater things, failure makes us kinder, more compassionate and far greatly understand God's grace.

I am thankful... for His clear answer and peace on the choices I had to make regarding my part time work. God is good!

I always enjoyed journalling along these Currently/These days/ prompts. Have you tried one lately? I just read one such Prompt journalling I did two years ago, one of the lines was: I am wondering... what Jared will be like as a angsty teenager. Well do I know now, lol :) he's really equally sweet as he is angsty I must say.

What else happened in June?
It's school holidays and we spent the first day with J and R at an Anime Music Festival. It was fascinating watching teenagers so passionate about singing, dancing to Anime Music. Our family is in a Tank phase, we watch tank themed shows, play World of Tank (I joined in too, in the name of bonding), build tanks, it's really fun really. 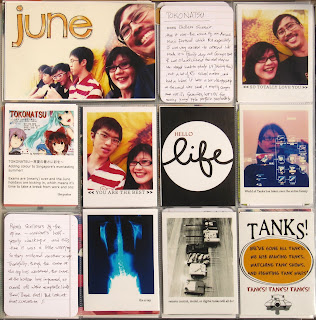 We spent five days at Rawa Island, our favourite island retreat. It's our fifth year, and everyone asks us what do you do at Rawa? So I decided this year's journalling will be as such. I  brought PL cards there and journalled as and when, and when we came back, just had to print the pictures and slot them all in, voila! 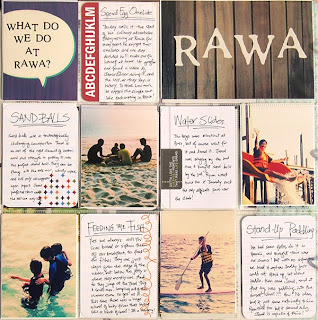 Here's the same left side page, with a Design H insert flipped over 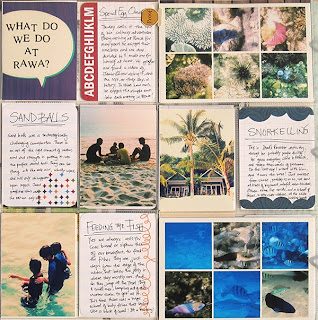 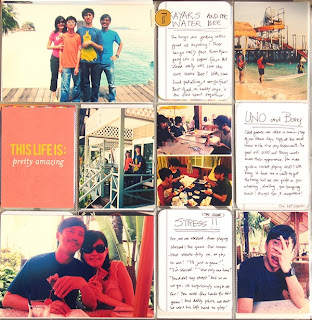 Same right side page without the insert 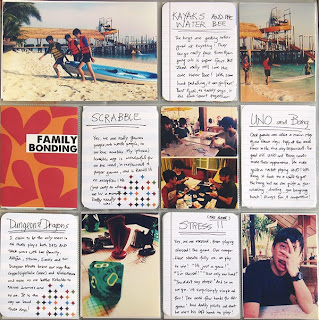 And a final page - we just asked the kids if they see us coming here even when they are grown with their families in tow, and they said, why not? 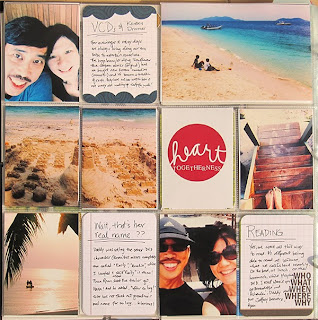 And Singapore descended into a terrible HAZE from fires in nearby Indonesia. The PSI climbed quickly within a few days to hit 400 one afternoon. We could not see buildings 100m away! It was quite a frenzy with mad rush to buy sold-out masks, everyone looking like robbers outdoors or stayed indoors and in air conditioning where possible. What a relief after a week the situation has improved greatly - welcome back clear skies! 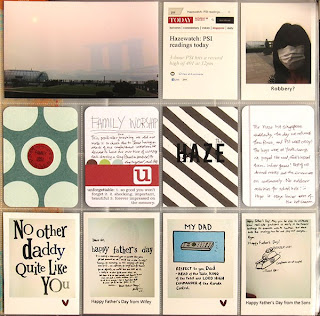 I'm linking up to Project Life Tuesday over at The Mom Creative!

P365 Bi Monthly Pages
And here are my photo a day for June - except for the Haze situation, it was the school holidays month, so lots of free and easy and relaxing and fun, including the kids going away to church youth camp and to overnight chalet with friends. We were home alone! They are growing up too fast! 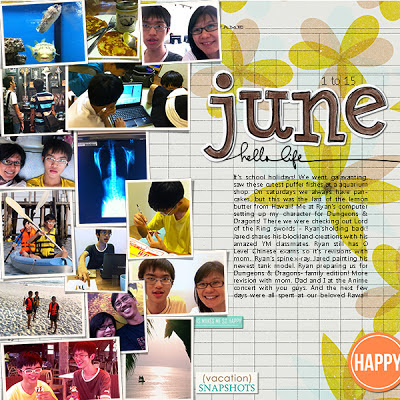 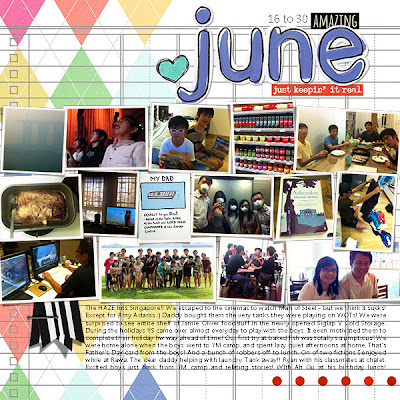 
Beijing Layouts - Tian An Men and the Forbidden City
The day we chose to visit was a fine winter day, with blue skies with not a cloud in sight. What a stunning backdrop!

For 500 years and two dynasties, the Forbidden City was the imperial palaces in which the Emperor and his family and household lived, and also where he held court and governed from. The entire area was walled up with so many outer, and inner courts, ceremonial and official buildings, and living quarters, apparently at one time, 980 buildings in all!
From when we were young, we have read, heard, watched countless stories/shows depicting the life and happenings within these walls, historical and folklore, of politicking among princes, assasinations, concubines, suicides, good emperors, bad emperors, empress dowager, till the last emperor. It was just amazing for me to step foot in this place!

First we come up to Tian An Men - the Gate of Heavenly Peace, which used to be the gate to the imperial city, within which the Forbidden City is situated. During the Qing dynasty only the Manchu people were allowed to live in the imperial city, the chinese people had to live outside. So it is significant that Chairman Mao made his declaration of founding of the PRC here, and also overlooks the square where the student protests of 1989 happened. We had to go up atop the gate tower and feel the exhilaration of that view over that square! 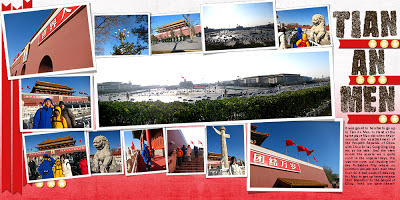 As we stepped through the gates into the city proper, it became apparent how huge this place is, and how much walking we are in for! What did they do with all that space in the courtyards between the buildings? Perhaps the vastness besides conveying grandness also serves to foil potential attacks on the emperor's life!! 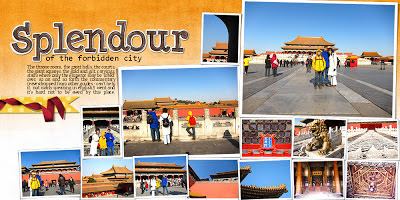 We have heard stories of how the walls kept intruders out, and kept wives, concubines and servants in. Horror stories of how concubines would be brought into the city, married to the emperor, but will never be able to leave and possibly never see their families again. The walls were beautiful though, worn but strong, keeping centuries of secrets.... 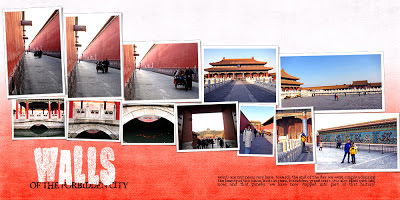 Within the living quarters were interesting sights, where the newly wed emperor spends their honeymoon night, the 3 storey opera theatre with hidden accesses, the well where the concubine Gui was forced to jump to her death.. 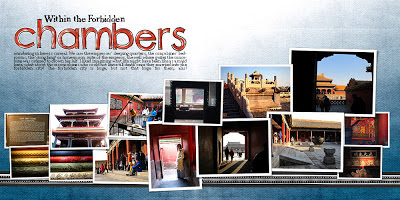 And there were much imperial treasures here to marvel yet. A lot of these were gifts from foreign countries, including an amazing clock with a clockworked doll that could write a poem in chinese characters! We had spent seven hours here by the time we left, but time just stood still for us that day. 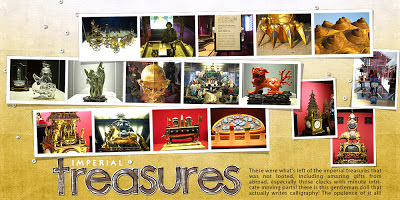 And like to  share this layout template with you, make something from your summer of 4th of July photos! And link back! 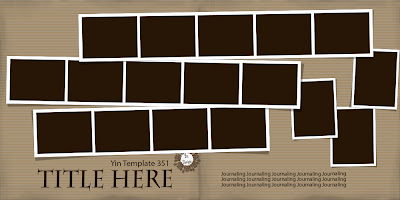 This template is now available as Template Pack 9 in the Store. Thanks for your interest!

Before I go, I'd love to show you layouts my friend Tracey did for her P365 pages. Don't her pages look like mine!  We think it is awesome that no matter how much different our physical worlds are, we follow the same Lord and have so much connection in Him! Thank you Tracey for sharing :) Visit her and her lovely and fun family at the Browning 1/4 acre plantation 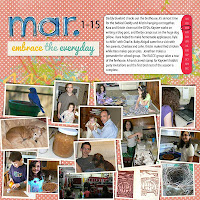 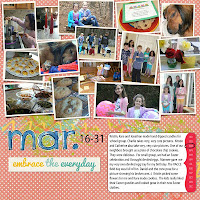 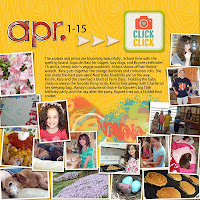 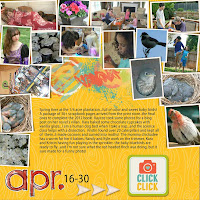