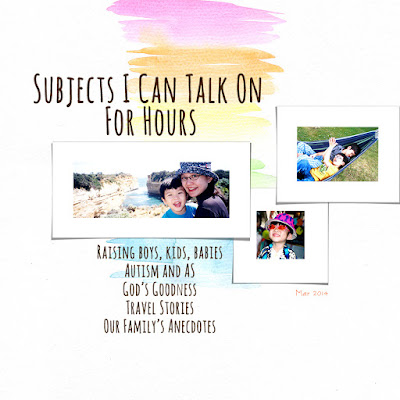 This layout is from a list I made in March 2013 as part of the 30 Days of List Challenge using template set 262. I pulled out some older photos, used the beautiful papers from Kaye Winiecki's Base Jumpers - Watercolors, and I love it! Oh and don't get me started on these subjects unless you have all day :)

You may remember that I've participated in 30 Days of Lists Challenge several times in the last few years, I love that the prompts help me to quickly capture thoughts, happenings, current, past and even future things about me that I might otherwise never have a record of. It helps me tell my story! Besides, Kam and Amy are lots of fun and inspiration. Everyone also shares their lists on the private blog, Instagram and Facebook groups and I love to see their takes on them!

So I enjoyed it so much I have signed up as a Sponsor for the coming September 30 Days of Lists Challenge! That means I will be sponsoring templates, hosting a giveaway and a list, and joining in the listing fun.  I hope you will join me! Click here or the image below to check it out!

Although I love listing, I have not been very good about making a tangible record of them. In the March 2013 edition, I captured them in my Project Life like this 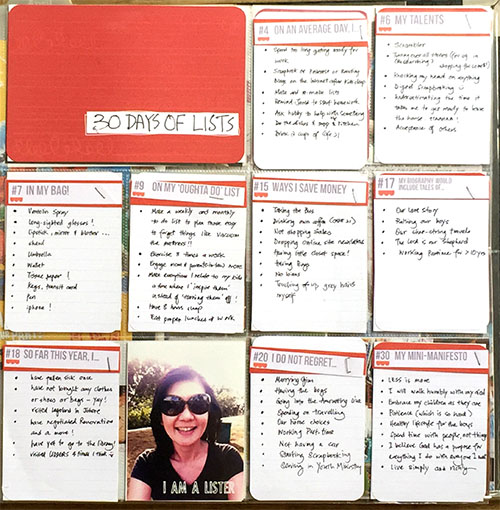 Later on, I simply made my lists on my phone and left them there. Then the idea came to me to make a Mini Book of my lists! I am scrapbooking them into layouts, adding photos, and am building pages from all my lists, to print into a book when I've collected enough. Let me show you some that I've done. 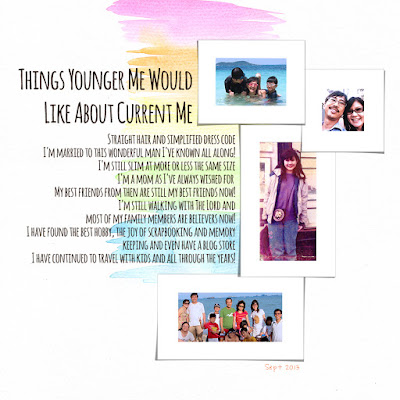 This is one of my all time favarites. You may have seen this list (+ explanations) in my blog post here 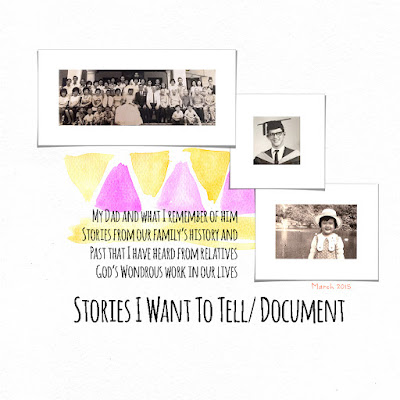 My dad passed away when I was fourteen and his story or at least what I remember or know about him is on my scrapbook bucket list. And although I have shared these stories with everyone I hope to collect in one place all that God has done in our family for our faith and encouragement, for future generations, to  know His Faithfulness and Goodness. 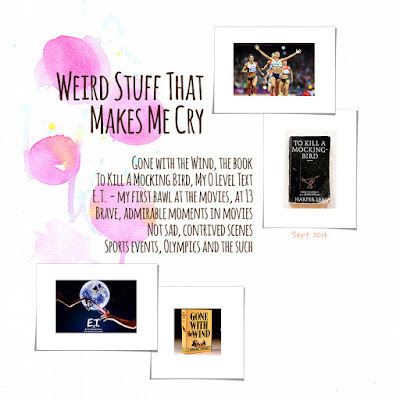 When I was nineteen my dorm mate coaxed me into reading Gone with the Wind with her. We will laugh and cry through it together over the next few nights. We will discuss it to no end and loved it. When we finally saw the movie for the first time together at our local library, of course we cried but because the words have come alive. It wouldn't be the same if we hadn't read the book first. 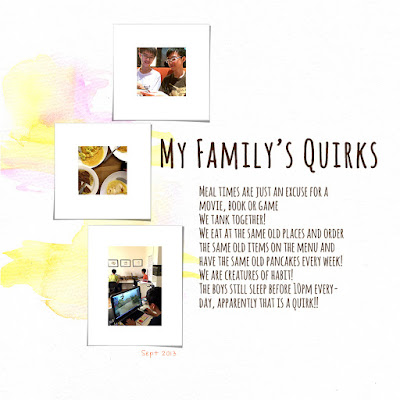 My family's quirks are many and unique to us and so fun to document!

It's going to be a cool mini book! I am not sure yet, but am thinking maybe an 8x8 album.... And it will span several years of lists. This project is making me so happy!

If you are collecting all your lists over time like me, do make sure to indicate the date the list was made in the layout. Since we may have different responses to each list over time. It is great that my book will capture what I feel about something at various points in time!

London Pages and Templates
And now, continuing on with the next few pages from my London album, we spent the best 3 days in Bath and loved it. Here are 5 layouts from Bath! I will let my journaling bring you along with us, if you are interested in my ramblings - I journal a lot! Oh and of course layout templates can be found in the store here!

Bath Abbey - Journaling reads:
Bath is literally a long time dream come true. It is as classically old and quaint and rich with history as I have always imagined. The moment our train pulled into the station and through the fog we can see the spire of the church, we were mesmorized, in a different world! We didn’t get to go inside the Abbey, but all around it is beautiful architecture and also a fantastic Christmas market. Later we would visit No 1 Royal Crescent which is one unit of the townhouse recreated in that time and age when Bath was the place to be seen and to see Society. Apparently Queen Anne bathed in the waters and bore an heir, and popularised Bath as a hip and chic destination. The who’s who were all here. So a lot of the units were built to rent to rich folks coming here for a stay. The house we saw had fake doors built in the Parlour that opens to nowhere so as to maintain symmetry with the real door(!) One guide told us in those days, the rich will bring their daughters to Bath (but not sons), so that they are introduced to Society  to be married off well. But no sons as young men would be out on world tours with their tutors, or at army, or training as clergy. So who will the girls find to marry? Much older men, widowers and such, it seems! Fascinating. We were shown so much of their lifestyle. Best tour for me! 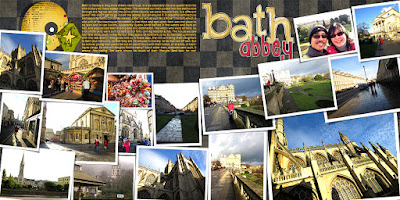 Next, the Royal Crescent, journaling reads:
We took a fantastic free walking tour, and learnt histories, stories and even gossip! Like the Abbey was carved with angels climbing up to heaven and also some climbing down, lol! There was Ralph Alan, a messenger who helped stop the Jacobite rebellion and prevented the catholic prince James from taking back the throne. Alan went on to invent the postal system, buy the hills of Bath that produced all the bathstones, and built Prior Park, to be seen, and to see all of Bath! Then there was the amazing John Wood (elder) who built The Circus, and his son John Wood (junior) who built the Royal Crescent. The Circus is beautiful for it ony has 3 openings/roads such that anyone entering from one can only see the opposite building, instead of an opening/exit as you would in a cross road. Ingenious! Then the Royal Crescent was not a semi-circle, like you would draw with a compass, instead our guide demonstrated with a loop of string, poltting 2 ends, and by dragging the loop out a both ends you get the Crescent. Beautiful!  He also showed us the back of the Crescent, no one is allowed to make changes to the front of the building as it is Heritage, but boy the alterations they have made to the back, especially for modern toilets! Not forgeting the house with the yellow door, the daughter of that household  was taken to court, lost and fought all the way to the House of Lords where they allowed her to keep it yellow - British democracy! haha! 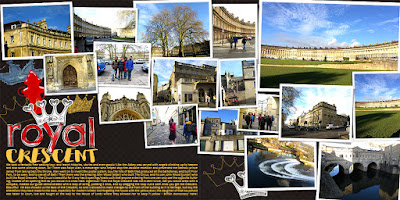 Roman Baths - Journaling reads:
The most fascinating thing is that these were only found around 1900s after 1600 years or so of their last existence! The Romans used them for 400 years. They had such superb engineering and an elaborate system of rooms - for worship, bathing, healing, swimming and social gatherings! All of them have different purposes, size, plumbing, drainage. The water is greenish and quite hot and in 1970s a girl died of menigitis and they found the water had been poisoned so all bathing is suspende until very recently when they built the new baths & spa digging far below to get to clean thermal waters. I do love wandering around old places and wandering about the ancient people who used to sit here, walk there, bath in the pools. 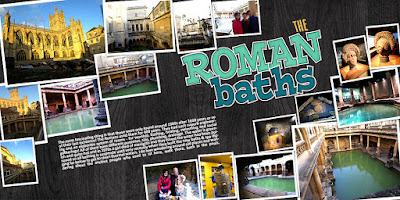 All Things Bath - journaling reads:
Getting into our self-service B&B is like a maze hunt game! After all that fun we found a super exciting space, wrapped in enclaves, with so many little nooks and rooms! Later we would realise the basement of these town houses were kitchens and servants’ quarters- but still wonderful for us! We also had a feast everyday we were in Bath, with all sorts of cuisine, including Asian ones that we have missed since coming to London. At long last we had dinner in a Jamie Oliver’s restaurant - dad’s to-do list - it was cool. Maybe because it is Christmas, Bath is lit and busy all the way till late, beautiful and such great vibes for visitors! 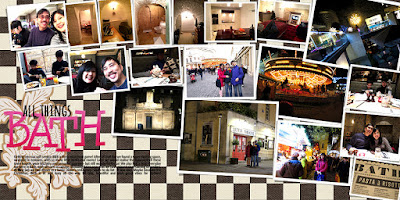 Prior Park and Combe Down - Journaling reads:
We decided to make for Prior Park (as I had read a historical novel about a Palladian style  home) by bus but the local people on the bus told us it is closed, and proceeded to give us to many suggestions! Eventually a lovely lady named Julia brought us to her village called ‘Combe Down’, and showed us around. The village was built by Ralph Allan to house his workers, with its own church and homes. (She lives in one of them now that was built in 1730s!). The insides of the hills were emptied (for the Bath Stone) and the homes were sinking and now we can see work going on to fill in the hills with something  I can’t remember the name of. She showed us to her beautiful church, and the kind caretaker told us a way to trek down to Bath, we bought some picnic lunch and off we went. To an adventure!! We trekked through a pre school, past parents picking up kids, through back lanes and where boys were swinging off trees, getting lost, before turning into what turned to be Prior Park College. It was beautiful and we sat down on some benches for our picnic lunch, starved and looking terribly out of place, or may be not so much, since someone came up to ask us for directions, haha! Ryan was worried we are trespassing, instead people were kind and gave us further directions, but we chance upon a cab just waiting at the gates for us and before long were back in town. To more Christmas market shopping! 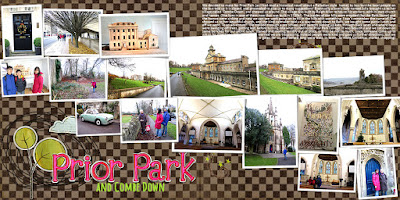 And, as is customary here, and because I love to share my love of this digiscrapping, here's the above layout template - free download for you to try! 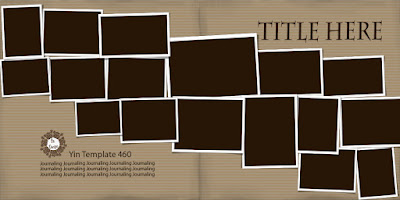 This template is now available as Template Pack 9 in the Store. Thanks for your interest!