Week in the Life (Vacation Edition)

This is a scrapbook anatomy of our vacation.
We went to Krabi in Thailand for five days for a getaway. It was one of those rest and relax trips, with no plans for much sightseeing, just time for 24x7 family bonding. I have not done week in the life for many years now that our family are all doing our own things everyday. So it struck me as I was planning that this would be a fun chance to record our vacation as it went, how we holiday, a week in the life, vacation edition! 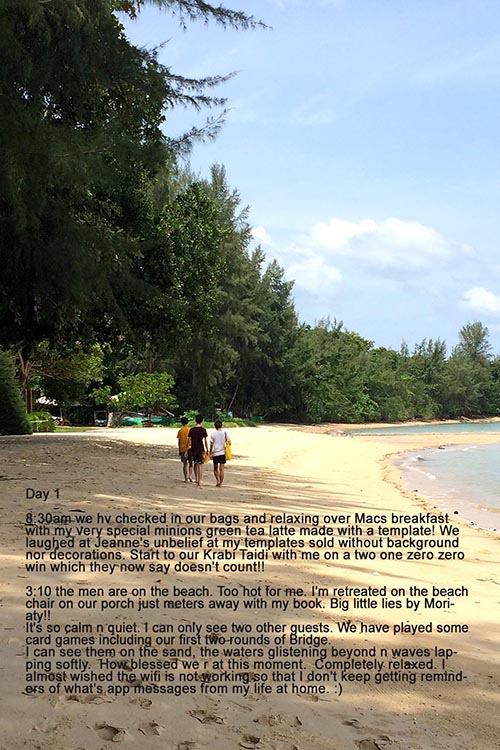 I journaled every few hours, focusing on the moment, what I'm seeing, experiencing, where we were, what we were doing. It was fun!! Everything was simply captured on my phone, using the SimpleNote app, in one long entry, adding the days and the time as we went along. 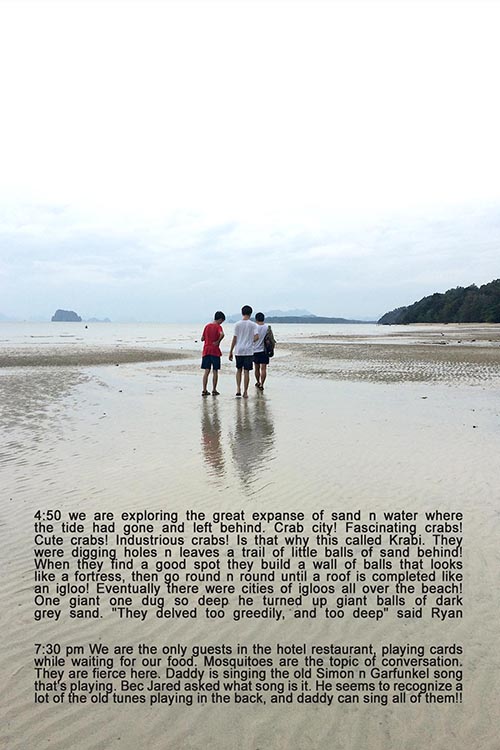 After we got home, I transferred the words onto selected photos, and planned them for my Project Life album. Didn't bother to use journal cards, our photos will be the perfect backdrop. Fast and easy! 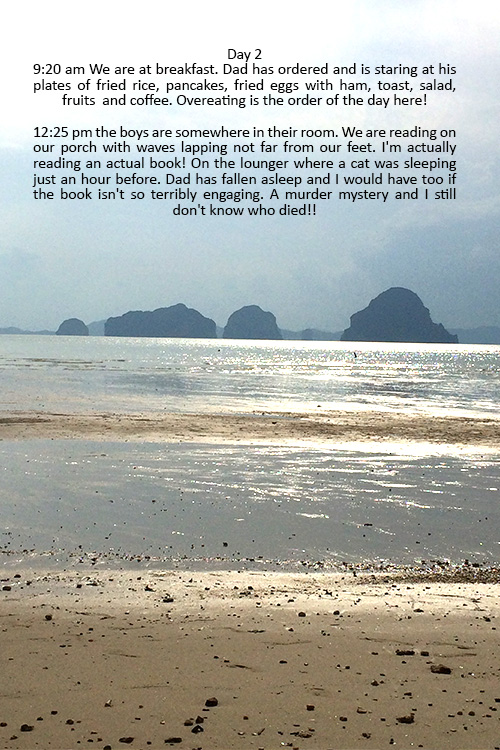 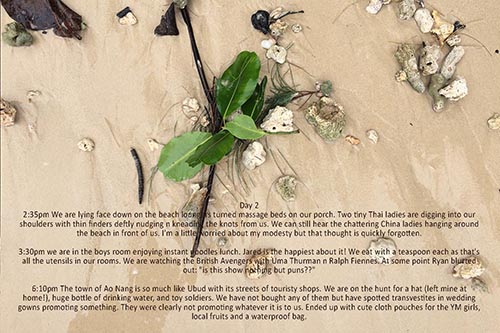 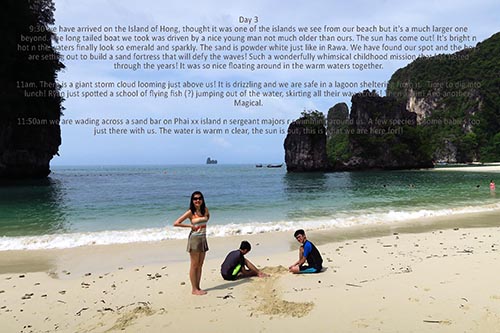 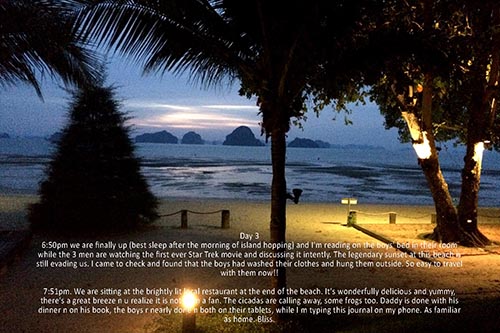 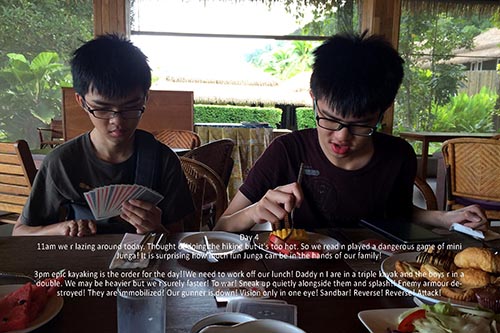 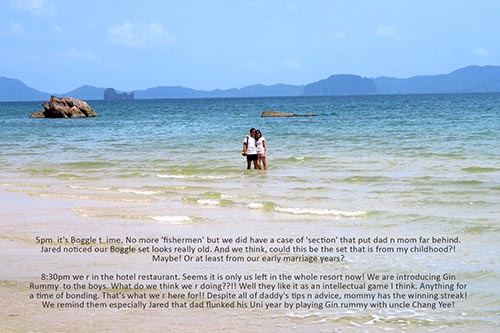 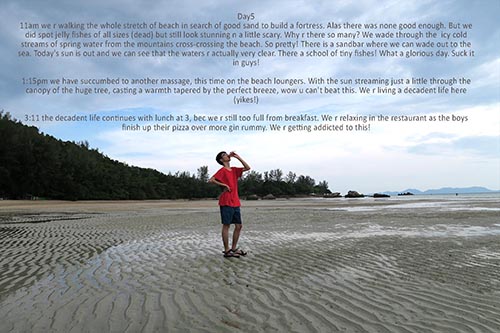 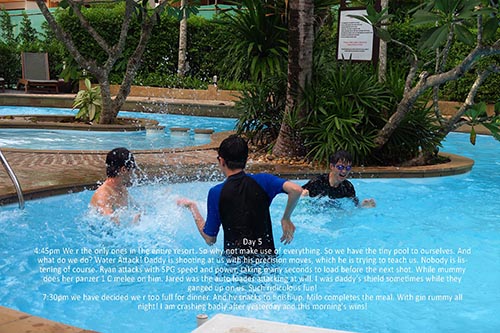 Project Life
This is how my PL pages looked in the pockets!
I cut up a Design A pocket into half, so I will get the spreads into two pages with a middle fold just nicely. 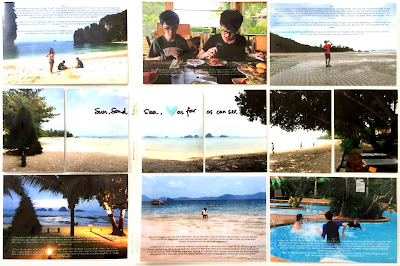 I also played with my own handwriting while at Krabi, using the Japanese brush pen again (see here and here for earlier installments). Here I paired my brushed words with ones I wrote with Sharpie for this title. The turquoise color effect is from the watercolour photoshop style included from this font set I bought. 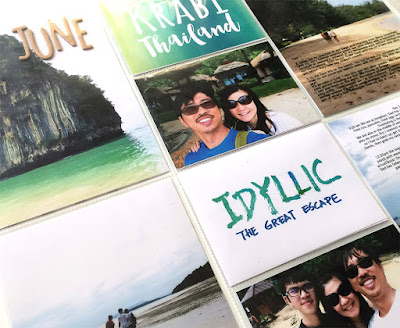 There were more words which I intend to use in my photo book for this trip eventually. Sharing these with you. I have colored them in this preview with either a single color, or using styles included in th Bonjour font set. In the file each word is in its own layer, color them as it suits your project! 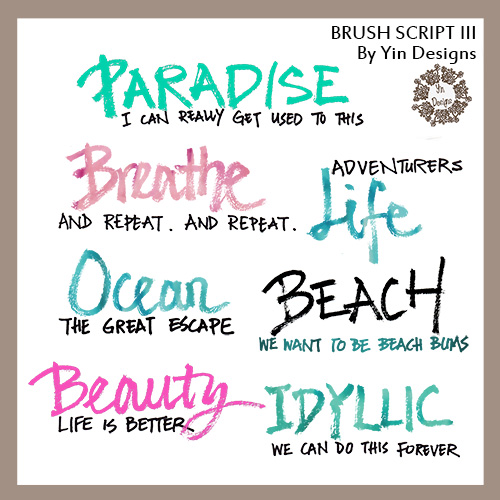 Next is one more last page of PL for the rest of June. We did lots of eating out and trying new places - a great pastime and excuse to get together! 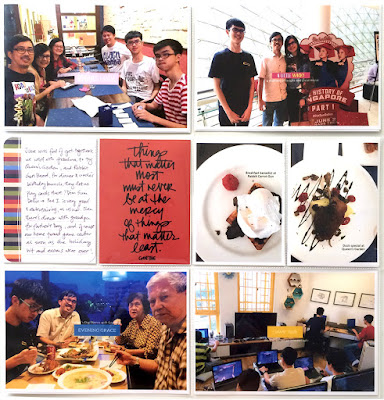 Project 365
Here is a P365 half month layout for June. Only one page since much of June captured in PL pages already 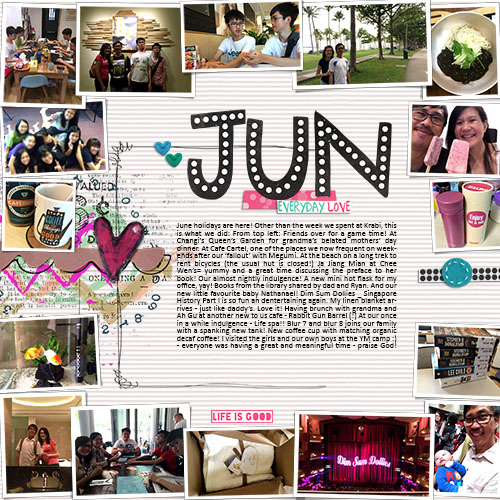 London Pages
I'm back working on my London pages!
Its great to take a bit of break in the middle of a long project like this one. I'm very excited and fresh and was able to roll out these four pages in three nights!
First two pages were of our day spent in Salisbury:

Journaling reads: We had our best hotel stay in Salisbury, only two nights in a beautiful serviced apartment, with rooms and separate bathrooms, kitchen, living and dining areas! We also strolled around the beautiful city - even the lanes around the canal was beautiful to us, we were amused by the ducks and fishes here! The shops were inviting but we only visited a model shop, and the Sainsbury’s for supplies! 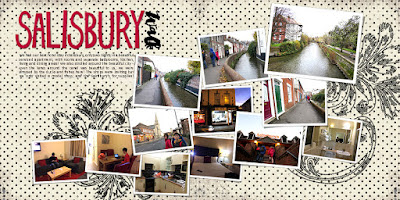 Credits: Alpha by J.Larsen included in The Daily Digi's Life of Change, Floral pattern by Ange,
Paper from RoyannaFritschmann's mylovemyLIFE

Journaling reads: First we saw a tall spire, thought that was it, how impressive, till we turned a corner, standing at a few blocks away, was the 13th century cathedral - looming tall and stately, quietly, powerfully, standing as it had for centuries, proclaiming God and mankind’s worship of Him. 123m tall, and built entirely in only 38 years, it is so beautiful!. The medieval sculptures and carvings adorn every part. Inside, it is even lovelier with the super tall vaulted roof. There were many tombs, of knights, it seems! We also visited the copy of the Magna Carta - and read some of the rules spelled out in it. So interesting. A lot about protecting the rights of widows, children and so on. They say it is the forerunner of human rights as we know it today. The cloisters was especially beautiful too, it was apparently never been part of a monastic foundation but were designed for processions and as a place for reading and relaxation. 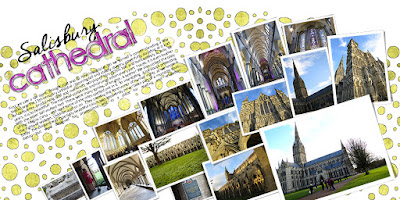 The next two were from the day we spent in Cardiff, Wales, visiting with my friend Kate and her family. Kate and I got to know each other as pen pals when we were kids! It was the in thing then and I had pen pals from all over the world. I wrote and received many letters which I still keep in a box. How nostalgic I am for those days!
Kate and I have kept in touch for thirty years now and met five times in that time. The last time was eight years ago when she was expecting her youngest so meeting them this time was so special! 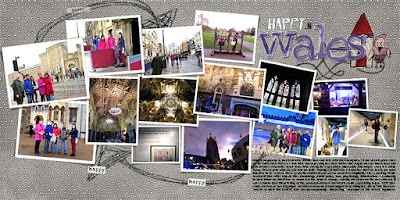 Credits: wood veneer Happy by GinaCabrera, happy on tape in TDD's MyLifeOfHappiness, doodled curl from For the Record by Valorie Wibbens, Happy word art by VickiStegall, background paper by Ezane, Mumbo alpha by Kara Fredricks, painted house and owl by Michelle Godin in Blusteryday, arrows from this+that 2 by Valorie Wibbens

Cardiff Castle is actually a huge ground with a wall, made up of a collection of structures. The loveliest is a Norman Keep that still stands in the centre.  We could climb it and the view at the top is so great. Apparently the Lord’s folks did live in these tiny rooms up there once upon a time. There was even a ‘toilet seat’ in one corner! There were also remains of Roman fort still scattered somewhere on the grounds. All the forts tend to be re-used through various wars. Cool! The main building is more like a mansion which has been elaborately decorated by the rich Bute family - it was  cool to visit too!  We have made it to Wales (well a corner of it), had a great  time with our friends, visited a castle and a keep. A very good day indeed! 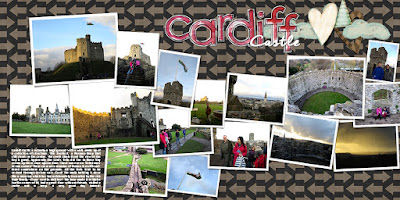 As usual, these layouts are also templates in the store. Thank you for following our adventures!

Subscribe to the newsletter to stay updated on product news,
freebies, blog posts, and subscriber specials.